The Elisa Lam Case from a Death Investigator’s Standpoint 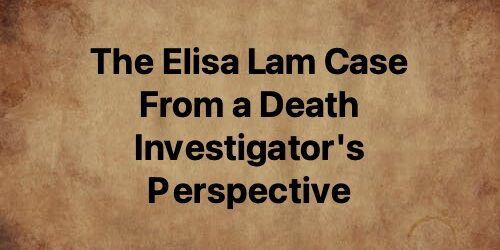 Netflix’s “Crime Scene: Vanishing at the Cecil Hotel” Has Raised A Lot of Questions in the Death Investigation Process – Here’s Our Perspective

The 2013 Elisa Lam case has sparked public interest again after the release of Netflix’s “Crime Scene: Vanishing at the Cecil Hotel.” And like the Netflix series showed, the investigation into Elisa Lam’s disappearance and death became a public sensation. Everyone wanted to know what happened, how it happened, and if the LAPD did a thorough job investigating the case.

As a private investigation firm in Georgia and South Carolina, we have worked on several thousand equivocal death (suspicious death) cases. And from a death investigator’s standpoint, the Lam case was thoroughly investigated and backed by fact-based evidence despite the public theories. To provide more insight, we have provided a few key insights into how and why this case was not as supernatural as the public theories made it seem.

Please note: We did not have any involvement in this case. We conduct death investigation services for Georgia and South Carolina individuals and legal entities. We are simply providing a our perspective on the case based on our experience.

Elisa Lam was a Canadian-born tourist visiting Los Angeles and stayed at the Stay on Main Hotel (a part of the Cecil Hotel). The Cecil Hotel has an infamous history of guests and residents committing suicide. American serial killer Richard Ramirez, or “the night stalker,” was also a resident of the Cecil Hotel during his crime spree in the 1980s.

Several days after Lam was reported missing, no one knew where she could be or if she was alive or dead. The only lead law enforcement had was a chilling video of Lam in the Cecil Hotel elevator, acting out of the ordinary. Lam’s body was eventually found nude floating in the hotel water tank – her clothes and hotel key were found at the bottom of the tank.

Her death was originally ruled a suspicious death until months later when medical specialists officially ruled the manner of death an accidental death after further examination. Although this should have been the conclusion to the investigation, the public did not seem satisfied.

From a death investigator standpoint, the evidence that law enforcement, medical specialists, and the investigators gathered reinforced their ruling.

Where the Theories Began: The Elevator Footage

The security footage of Elisa Lam in the elevator at the Cecil Hotel was undoubtedly haunting. 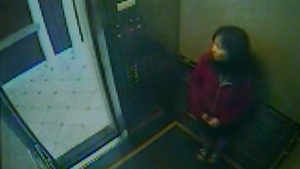 However, hotel guests and employees reported Lam’s behavior prior to the elevator footage as “erratic.”  In the short video, Lam was alone in the elevator making unusual movements and gestures.  She pressed every button on the elevator panel and kept getting in and out of the elevator. The video was released publicly due to the LAPD not having leads of her whereabouts after the elevator video.

The video drew worldwide interest and many people started creating their own theories on what was happening to her and what happened after she left the elevator. Many theories suggested that someone was following her or that she was under the influence of some drugs.

Once it became known that Lam suffered from bipolar I disorder, many were quick to dismiss this as relevant information in determining the cause of her death. However, as a certified death investigator, we know that any factual information into a person’s life can be useful in piecing together the circumstances surrounding a person’s death. Which is exactly what law enforcement in the Lam case did.

The toxicologist report stated that they found no alcohol or illicit drugs in her system. They did, however, find that the prescribed medication levels were extremely low compared to the prescribed dose. Backed by LAPD’s finding of Lam’s medication quantity exceeding the refill dates, it became more apparent that she was experiencing a psychotic episode before she died.

Although police dogs are often used to help us find missing people, they are not always entirely reliable. Cadaver dogs are an efficient way to search for remains due to the fact that they can cover large areas quickly and easily, with decent accuracy.

However, their accuracy is not perfect. Many factors go into the accuracy of a cadaver dog ranging from how long the body has been decomposing, the manner in which it’s decomposing, and even to the individual dogs used. 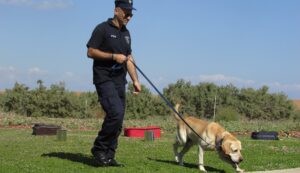 Lam’s body was found in a closed water tank, which is important because it means the vapours that the dogs are trained to pick up were not able to spread much outside the tank. The spread of the vapours is a key part in a cadaver dog’s ability to find or indicate the presence of a body.

Outside of Lam’s case, cadaver dogs also have issues ranging from the dog simply not being interested in the right scent or the handlers accidentally misleading the dog, causing it to be confused.

Pig remains are widely used to teach the dogs due to them being easier to get a hold of. This is unfortunate because the chemicals emitted from human remains and pig remains are some of the least similar of humans and other animals. There have actually been instances when cadaver dogs have led police to pig remains rather than the missing person.

Finally, the lack of standardization in the training process of cadaver dogs can also call into question the reliability of the dogs. What all of this means is that police dogs are often an asset in an investigation, but they are not alway reliable.

In several death investigation cases, we have been able to rule a person’s death a homicide, suicide, or accidental death based on the fact-based circumstances and evidence at the scene and markings on the corpse. When a death is ruled a suspicious death, there is not enough evidence to confidently conclude the manner of death at that time and requires more evidence.

[RELATED: What is Considered a Suspicious Death?]

Oftentimes when there are no witnesses or the body is found days later in an environment with little to no insight into the moments leading up to their death. This is the same thing that happened in Lam’s case. 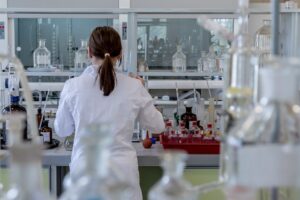 Five days after the LAPD released the elevator video, Lam’s body was discovered in a water tank on the roof of the hotel. Prior to the body being discovered, residents and guests of the hotel complained about low water pressure and that their water was darkly colored with a weird taste.

This led to a hotel maintenance worker finding Lam’s body in one of the four 1000-gallon water tanks on top of the roof.

Lam’s body was found nude, decomposed, bloated, and lying face up in the water. Her clothes and personal belongings were found at the bottom of the tank. To remove her body, the tank was drained and had to be cut open due to the fact that the hatch on the tank was too small for the proper equipment to remove Lam’s body to fit through.

This was undoubtedly suspicious, which is why further analysis had to be done. Was the death a suicide? Homicide? or accidental?

[RELATED: Accidental or Homicide: How Do You Know?]

Additionally, Evidence and Medical Reports in a Death Investigation Are Almost Never Fully Released to the Public

Though the investigation did determine how Lam died, it did not originally explain how she got in the tank in the first place which led to many people being skeptical whether it was in fact an accidental drowning or a police cover-up. “What are they trying to hide?” In reality, most of these reports are often disclosed to the public. The Elisa Lam case was no exception.

The Coroner and medical reports level of availability to the public greatly depends on what state the crime occurred in and if the information could jeopardize an investigation. Because the autopsy report concluded the cause of death was accidental, there was a possibility that the Cecil Hotel was liable for negligence.

This is why no information was released to the public for several months until the investigation was complete and determination of fault was conclusive.

In Conclusion, Despite the Public Theories, This Was a Standard Death Investigation Done Correctly

The lack of defensive wounds, internal injuries, sexual assault, and other indications of another person involved in her death is significant. Once Lam’s body was removed, the Los Angeles coroner’s office performed an autopsy on Lam and determined that she died due to accidental drowning with no signs of foul play. There was also no forensic evidence of a second person at the scene that would indicate a homicide.

The autopsy showed that there was no evidence of physical trauma, sexual assault, or suicide. The toxicology test that was performed showed no recreational drugs or drugs not prescribed to her in her system. It was determined however, based on the amount of her prescription drugs in her system that she was under-medicating herself at the time or had recently stopped taking her medications, which cause the impulsive act – causing her accidental death.

Given the evidence gathered by law enforcement and medical specialists, this case was properly investigated and the cause and manner of death is conclusive – even if it does not appear to be to the public.

Join us for our 2nd Annual Security & Licensed Investigator Conference! Receive CE Hours and learn from our amazing speakers and guests.

No Thanks, I Don't Need CEU Hours